Be still before the Lord and wait patiently for him;
fret not yourself over the one who prospers in his way,
over the man who carries out evil devices!
8 Refrain from anger, and forsake wrath!
Fret not yourself; it tends only to evil.
9 For the evildoers shall be cut off,
but those who wait for the Lord shall inherit the land.
10 In just a little while, the wicked will be no more;
though you look carefully at his place, he will not be there.
11 But the meek shall inherit the land
and delight themselves in abundant peace.

I can’t stand bumper to bumper traffic. It’s got to be one of the most frustrating moments in life, especially if you are unfamiliar with the area you are negotiating. Even on roads I’m very familiar with, not knowing what’s ahead is difficult to stomach.

Yesterday and today, thanks to “Jack Frost and Mother Nature” (or is it Global Warming?), the school I work at was on a 2 hour delay. Basically, I still need to be there at my starting time, but I have a slight “grace” period.

Most of the other folks on the road with me, apparently don’t have that understanding, with their place of employment. The “rat race” doesn’t slow down because of a little snow and frigid temps. There isn’t a lot of grace to be had in the world.

This morning as soon as I hit the main drag, all I could see ahead was a steady stream of red brake lights in the dark and dreary wintery morning din. 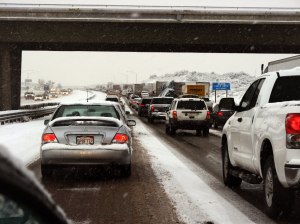 I instantly decided to “relax”, drink my coffee and listen to some inspiring music. I would get to work and thanks to the grace I was granted, by my boss, I would do it amidst the mad scramble around me, at ease.

Rushing head long down the road most traveled is never a good idea!  But so many are doing it every day, right into all the trouble ahead.

fret not yourself over the one who prospers in his way,
over the man who carries out evil devices!

Perhaps this is not an appropriate use of this scripture, but I chose not to fret as fellow drivers flowed beside me in the traffic jam, texting on their evil devices. 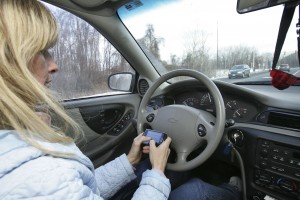 Refrain from anger, and forsake wrath!
Fret not yourself; it tends only to evil.
9 For the evildoers shall be cut off,
but those who wait for the Lord shall inherit the land.

But, as one evil texting driver was slowly falling behind the bumper ahead of him, I promptly inherited the land…. I mean lane, as I cut him off, so to speak!

Alright, I’m being a little daft , but this scripture sort of spoke to me as a I read it and recalled my peaceful trip to work, as many others around me were experiencing driving with hair razing braking, slip sliding and blinding road scum on their windshields.

If we know a way around heavy traffic, we take it. Unfortunately, we can’t always avoid traffic jams, even with GPS devices, smartphones and on board navigation in cars, the craziness of gridlock can find us. Yes even our shortcuts can be effected!

I view our society much like a major highway system. The more popular the highway and destinations on it are, the more dangerous it is for your (Kia) soul!

All highways have danger spots; pot holes, nasty turns, intersections, signs, bad weather, bad drivers, impaired drivers, blind spots, and tired old vehicles bent on breaking down at the worst place and at the most inopportune time. This becomes increasingly dangerous in bumper to bumper traffic.  You can’t see all the obstacles, which are hard even to spot on a clear highway.

Life is the same way.  No matter how well we now the circles we run in, the faster we move, the closer to the rest of the people we are running with, the more likely it is that we will find a pot hole or two, or miss an important turn.  As followers of Christ, we need to be in the world, but not of the world.  That means bumper to bumper traffic with those folks of the world!  Dangerous for us, to be sure, but the promises of God are sure and true.  He promises none can take us from His palm,

“My Father, who has given them to me, is greater than all, and no one is able to snatch them out of the Father’s hand.”

and that all works for good.

The highway of life goes many popular places, and it is those busy highways where most of the people are, going to those places. Needless to say, they aren’t always the kinds of places we as believers probably would go, but are we called to……… do just that?

Jesus supped with liars beggars and theives, He was followed by sluts, adulterers, haters, cheats,  and irreligious.  Jesus did not avoid them, in fact He sought them out!  When Jesus was done with them many were no longer the same people that started following Him.  He loved them all, do we?

Think of the crowds that surrounded Him, searching for the one thing that could replace the emptiness they knew.  The bumper to bumper traffic of their lives.  For many who had been heading down the Highway to Hell, they instead found themselves on the Stairway to Heaven.

See……. in traffic jams people are searching for a way around! The cool thing is we know the way around, we have the answer and if we are willing to engage those people on that highway, they can follow our lead and discover Him also! 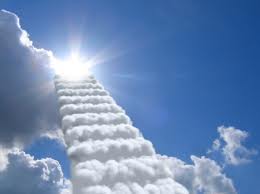 Haven’t you ever followed someone that you could just tell knew something you didn’t.  Knew the way around the traffic jam?  Low and behold…. they did!  I love when that happens!

Do we love them enough, those caught in our day’s, bumper to bumper,….. life traffic,…… to get in to the traffic, to guide them around the jams of life?

Jesus said several things, ……  that hit me today, as I watched so many rushing to their final destinations, not able to really see where they were going.

So Jesus said to them, “The light is among you for a little while longer. Walk while you have the light, lest darkness overtake you. The one who walks in the darkness does not know where he is going. 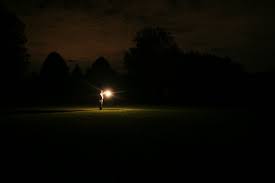 We must work the  works of him who sent me while it is  day; night is coming, when no one can work.

Go therefore and make disciples of all nations, baptizing them in the name of the Father and of the Son and of the Holy Spirit. ~ Matthew 28:19

We who have the light have been tasked with going unto the world to make disciples.  It is dangerous because, the enemy doesn’t want us traveling along in the same bumper to bumper traffic with the stuck, …………… but if we are doing the will of God, which it plainly is, God will empower us!

9 For the evildoers shall be cut off,
but those who wait for the Lord shall inherit the land.
10 In just a little while, the wicked will be no more;
though you look carefully at his place, he will not be there.

But…….. our Father, would rather we do the work of Jonah, who reluctantly went to Ninevah.  There God saved a nation through Jonah’s word, given by  God.

Sometimes we forget, the phrase ,“But for grace, there go I”.

Thank God someone loved us enough to get into the traffic with us and show us the way around!  They chanced the difficulties and God was true!  He will be for you too!  He promises and I believe…..

31 What then shall we say to these things? If God is for us, who can be[i] against us? 32 He who did not spare his own Son but gave him up for us all, how will he not also with him graciously give us all things? 33 Who shall bring any charge against God’s elect? It is God who justifies. 34 Who is to condemn? Christ Jesus is the one who died—more than that, who was raised—who is at the right hand of God, who indeed is interceding for us.[j] 35 Who shall separate us from the love of Christ? Shall tribulation, or distress, or persecution, or famine, or nakedness, or danger, or sword? 36 As it is written,

“For your sake we are being killed all the day long;
we are regarded as sheep to be slaughtered.”

37 No, in all these things we are more than conquerors through him who loved us. 38 For I am sure that neither death nor life, nor angels nor rulers, nor things present nor things to come, nor powers, 39 nor height nor depth, nor anything else in all creation, will be able to separate us from the love of God in Christ Jesus our Lord.

Ponder this next time you’re stuck in traffic:  How many of those stuck there with you are lost, and need to be shown a way around?

Come on pull out and lead them down your short cut!

Remember, The night is coming when no one can work!

3 thoughts on “Bumper To Bumper Traffic”