1 In the beginning was the Word, and the Word was with God, and the Word was God. 2 He was in the beginning with God.3 All things were made through him, and without him was not any thing made that was made. 4 In him was life, and the life was the light of men. 5 The light shines in the darkness, and the darkness has not overcome it.
6 There was a man sent from God, whose name was John. 7 He came as a witness, to bear witness about the light, that all might believe through him.8 He was not the light, but came to bear witness about the light.
9  The true light, which gives light to everyone, was coming into the world. 10 He was in the world, and the world was made through him, yet the world did not know him. 11 He came to his own, and his own people did not receive him.12 But to all who did receive him, who believed in his name, he gave the right to become children of God, 13 who were born, not of blood nor of the will of the flesh nor of the will of man, but of God.
14 And the Word became flesh and dwelt among us, and we have seen his glory, glory as of the only Son from the Father, full of grace and truth. ~John 1:1-14

He was, He is, He ever shall be the full revelation of God to mankind. He has been, He is being, He ever shall be rejected by most, but to those who trust in Him and that which He revealed of God… He has saved,  He saves, He shall save….. for all eternity!
Who is Jesus?

The Life that gives Light to see by, That light leads the way even amidst the darkness that has befallen the world.  No

matter how dark the world can be at times, it has not or will not be able to extinguish the light of Truth.

Jesus, more than a good man,…. WAS…..God,….The Creator’s Creating Power,….God’s Word, …….Revealed Word of God, ……He is the source of Life, …. The Light of the World, …….The Life that gives Light to see by, That light leads the way even amidst the darkness that has befallen the world.  No matter how dark the world can be at times, it has not or will not be able to extinguish the light of Truth. That Light was breathed into all mankind by God at Creation, but because of Free Will‘s gift, man chose darkness over light, yet the spark of light remained within all and darkness can not put it out, and some will recognize the light and it’s truth…. in time.
When Jesus came into the world,  that same life, that same light, came to bear witness to the truth and reveal God.  Even though he had created those He was coming to, most would reject him.  For they refused the very light within them, for the darkness, of man’s own will, man’s own pride, man’s own power.  Yet others, recognized in Him the truth of the light that was still within them, and put their trust in Him, and were given the right to be called Children of God.
Forsaking their own will and trusting the very life that God breathed into all mankind originally.  This choice….. bringing new wisdom…. and understanding to the world (natural and spiritual) that surrounds them, opened through….. new spiritual eyes, …..a new spiritual life.

The rejectors don’t get it.  They have been blinded by the darkness, of man’s freedom of will, of his pride in self, and belief in his own life’s power.  This self belief has shaded the light of truth within, and kept them spiritually dead, and ignorant of the spiritual truths that surround them.
What seems common sense to those with spiritual eyes to see, is but gibberish to those indifferent to the light, due to the darkness they choose to trust in.
Yes Jesus is the answer.  He, the giver of life, in man…. a life to be enjoyed in the presence of God.  Yet, not forced…. has reconciled those, trusting in God and Light, over the darkness of their own wills. He born in them a new desire for the light that had always been within.  For those not recognizing how truly dark the human desires are, he allows them to ignore the light within them forever.  To their ultimate eternal regret.

So who is Jesus?  Don’t ask Friedreich ……… He didn’t get that question right, and thus along with his darkness and own power, is fried! (pun intended)
It seems to me that this should be a burning question (pun intended) for all to answer.  You should search it out with all due diligence.

Allow your delusions to be destroyed!
Jesus said,

“I am the light of the world. Whoever follows me will not walk in darkness, but will have the light of life.” ~ John 8:12

Here it is obvious that Jesus is speaking of the Spiritual Life, because all of us will continue to walk in the dark throughout life.  It is much more than a metaphor though, it is the very spiritual truth that the unbeliever denies.
Paul speaks directly to the spiritual reality past of a believer, sharing the unseen spiritual transformation, from death in the kingdom of Earth and Satan’s authority, to life in the kingdom of Heaven, under Christ’s authority.

“You formerly walked . . . according to the prince of the power of the air . . . the spirit that is now working in the sons of disobedience”
~Ephesians 2:2

The believer has the life (spiritual) restored within while the unbeliever has no  life (spiritual).  This life given, spiritually, by one way and only one way, the belief in Jesus Christ, the one sent by God.
The following scripture is Jesus’ statement of His flesh and blood being true food and true drink.  He is not literally telling us to drink His blood and eat His flesh.  He is not speaking of cannibalism, but speaking of the spiritual reality of living on Christ through belief in Him.   All men eat and drink the physical bread and physical drink, yet still physically die.  But spiritually, God gives us life, through His son Christ, the spiritual bread and wine.

52 The Jews then disputed among themselves, saying, “How can this man give us his flesh to eat?” 53 So Jesus said to them, “Truly, truly, I say to you, unless you eat the flesh of the Son of Man and drink his blood, you have no life in you. 54 Whoever feeds on my flesh and drinks my blood has eternal life, and I will raise him up on the last day.55 For my flesh is true food, and my blood is true drink. 56 Whoever feeds on my flesh and drinks my blood abides in me, and I in him. 57 As the living Father sent me, and I live because of the Father, so whoever feeds on me, he also will live because of me. 58 This is the bread that came down from heaven, not like the bread the fathers ate, and died. Whoever feeds on this bread will live forever.” ~ John 6:52-58

Interestingly enough, this statement was given to the very same mass of people that were fed with the miracle of fish and bread. They were hungering for the physical food, but Christ was telling them of their need for His spiritual food and drink.  Yes, God blesses us with the means of physical life, but He want’s us to live the Spiritual life as well with Him. 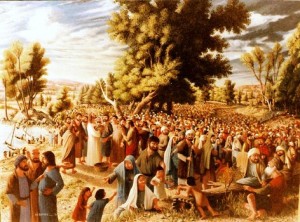 As it was……. so it is, people want what people want, we are a selfish lot.  We want it now and we want it here.  For many if they can’t see it and experience it now, they just won’t believe that you can.   It is nonsense to them because one, they can’t see it,  and then second, because they can’t experience it now.  Thus they conclude ” you can’t prove the spiritual”.
They deny the experience of all those of faith that have genuinely experienced the spiritual now.  We are the crazy ones.  But my heart bleeds for them, because I know of what I speak!
Feed on “the Word of God (the Bible)(Jesus), trust in what it(the Bible)He (Jesus) says.  Really live the life you were meant to, all of it, not just the physical, but the spiritual as well.
Ponder this as you consider the unseen.  Do you see your thoughts?Do you see the wind?  Do you see radio waves?  No you don’t, but you do see the results of them.  Look closely at a Christian, not just anyone saying they are, but one that you hold in high esteem.  Do you see the effects of the spiritual in them?  Heck, Christian, do you see the effects of the spiritual in yourself?
Just as a tree bends to the wind, and a written idea, proves a thought, and my ears hear the ball game coming from the radio…………

…..so a  life changes  when given new spiritual eyes and life in Christ.

He…..Jesus, is the Creator, the giver of life, the One and Only, Word of God revealed unto life eternal with Him!